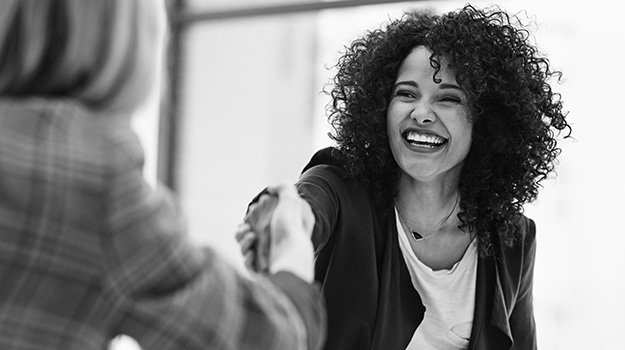 When Donna Strickland, PhD, in 2018 became only the third woman to win a Nobel Prize in physics, she was still just an associate professor at the University of Waterloo in Ontario, Canada. Asked why she wasn’t a full professor, she responded that she “never asked” writes Jennifer Lubell, AMA contributing news writer.

Women too often assume that their contributions will get recognized and they’ll reap those awards automatically.  “But we know that women need to ask,” advised Anees B. Chagpar, MD, MSc, MPH, MA, one of last year’s recipients of the Joan F. Giambalvo Fund for the Advancement of Women. Strickland, who won the Nobel for helping to revolutionize laser physics, now holds a full professorship.

Dr. Chagpar—a surgical oncologist and professor in the Yale School of Medicine Department of Surgery—received the award for developing a virtual, interactive negotiation workshop for women physicians. In a video presentation, she revealed three keys to successful negotiation and detailed how her workshops are helping women in medicine get what they deserve.

Fear of rejection often deters women from taking the first step in negotiation, which is initiation. Dr. Chapgar teaches this skill as part of her negotiation training courses. Be proactive—“just ask,” she said.

The second step is strategizing your negotiation. “Part of this comes from being really prepared,” she said. How can you think about things from the other person’s point of view? What style are you planning to use so that you present yourself in a positive way?

People assume the negotiation is over once the papers are signed. “That’s not really the case,” said Dr. Chagpar, an AMA member. A third step in negotiation is making sure all interests are covered post-settlement.

Gender inequities exist for pay, promotion and perks, said Dr. Chagpar. This takes place across professions, including medicine. One study of more than 500,000 medical school graduates in The New England Journal of Medicine found women were less likely to be promoted to associate or full professorships than their male counterparts.

“Forty-nine percent of assistant professors are women. But only 14% of full professors are women,” she noted. This carries into pay as well. Another study in JAMA Internal Medicine found a $50,000 difference in physician salaries between men and women in U.S. public medical schools, even after controlling for factors such as age, faculty rank, experience and scientific authorship.

Women are, of course, capable of negotiating just as well as men, but not enough of them do this for themselves. Men tend to initiate negotiations four times as often as women. In comparison, 20% of women don’t negotiate at all, even when they think they ought to.

Women are also more cautious about approaching job searches than men. On average, men apply for a job when they meet 60% of qualifications, whereas women wait until they’re 100% qualified for a job. “They really want to make sure that they have every box checked before they take that leap,” said Dr. Chagpar.

Why is it so difficult to negotiate? While several reasons may be at play, many women just aren’t comfortable with the negotiation process, said Dr. Chagpar.

“They don’t want to be perceived as a Gordon Gekko: the person who says, ‘Greed is good.’”

Women also have fears about hearing the word “no” and appearing adversarial. They also are more likely to be unsure about how appropriate a request is, or what to ask for, Dr. Chagpar said.

Dr. Chagpar applied for the Joan F. Giambalvo Fund for the Advancement of Women research grant as she was thinking about a virtual option for negotiation training that would offer a more interactive format to help women physicians and medical students.

Dr. Chagpar developed two courses: one for faculty and practicing physicians, and another for medical students and resident physicians. In post-course surveys, many said they took actionable steps such as asking for more pay, a promotion or time off, and that things went better than expected in these negotiations.

Participants got to test their negotiation skills through a series of interactive modules. In one exercise, they went out into the real world to ask for something from a stranger. They also paired up, and over the course of a week, negotiated something job-related with a class partner. In videoconferencing breakout rooms, they practiced negotiation with people they weren’t familiar with. This allowed participants to overcome fears about the power differentials that often exist in negotiation.

She has since refined the courses based on feedback from the initial participants. The course covers negotiation tactics, initiation, integrative bargaining and more