The Stethoscope – JAMA A Piece of My Mind by JoAnne Burger, MD 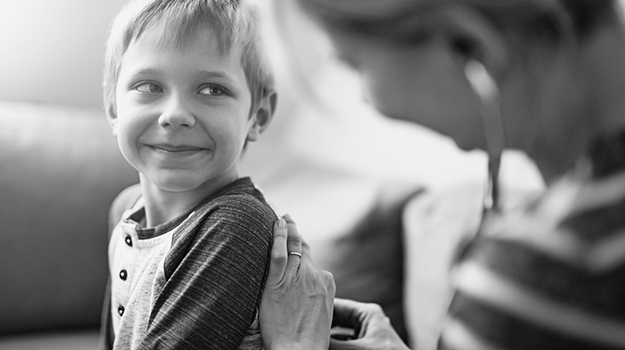 I almost didn't bring my stethoscope into the room. It was the end of the day, the end of the week, my neck ached, and I was dreading this encounter. The visit would be purely psychological, posing no diagnostic dilemma that a stethoscope might clarify. And yet, I threw it round my neck, my well-worn prop. A label and signifier, it might somehow help me traverse difficult ground and perhaps also provide permission to poke and look and ask. Maybe, to listen too.

I hurried into the examining room where the patient and his father were waiting. I had seen them a month ago at the funeral, although the church, stuffed with people and moist with tears, felt so foggy and viscous that I was certain they had not known I was there. I struggled to remember the last time I had seen the dad in my office. It was the boy’s mom who always brought him and his older brother in to see me now that they were teenagers, although I knew that their dad had been present during the earlier visits when the boys had been very little.

I recalled another encounter with both parents that occurred right after all the results of my young patient’s psychoeducational testing results were back. I had met with both of them to process the news that this sweet blond boy with thick glasses, whom they had recently adopted, would likely have significant learning, attentional, and intellectual challenges. Over countless visits, I watched a mother transform herself into a fierce unwavering advocate. But I barely knew this quiet, kind-eyed father who sat before me and seemed to think I would know just what to say.

But who could know what to say to a 13-year-old who had witnessed the death of his mother when a red car barreled down the street while they were walking their dog on the first warm day of spring? Anxious about how to start, my mind turned to that lovely March afternoon. Not yet knowing the news about his mother, I had rushed home from work that day to grab my trowel and turn over the soil, readying it for the peas I would soon plant. Plunging my hands into the fragrant clods of earth felt like a celebration of the miracle of spring. Not such a miraculous day after all, I realized and pulled myself back to the waiting child and father in my office.

“The driver never even stopped, and mom flew up, maybe 10 feet....Is that right dad?” Dad nodded silently and looked at me quizzically. “Yeah, she flew up 10 feet and across the street. The dog was thrown too but she's okay.” Walking into the room a few minutes ago, I had tried some lame pleasantries and bland expressions of condolence, but clearly the boy was ready to get right into it. I touched my sore neck and the bell of my stethoscope. My eyes caught the inscription on the stethoscope, which had been donated to me as a first-year medical student so many years ago. It said something corny but true like, “Listen to your patient...and to his heart.” He had no interest in sitting quietly during my inner musings. He blurted out, “The police found the guy, and I bet he will spend the rest of his life in jail.…Yup, the rest of his whole long life, but I know my mother is up there and she is watching me. That's right Dad, isn't it?” Dad shifted uncomfortably in his seat as his son continued in a sing-song, high falsetto voice, making eye contact with the side of my head.

I was pretty sure it was time for me to say something, but my voice was suddenly trying to fly up 10 feet too. I dragged it off the ceiling and got out a medical school classic, “How are you feeling?” Not such a creative and articulate line I know, but it worked. He pointed to his chest in a way that makes physicians grab reflexively for an EKG machine, hoping that a crash cart and experienced nurse will instantly appear.

“It hurts right here, and I feel a pounding in my chest,” he said, but now his voice was low and serious.

“Do you think your heart is broken?” I asked.

“Maybe,” he said dolefully. “Will you check it?” he asked, pointing to the stethoscope.

He hopped up onto my examination table, unbuttoned his shirt and waited for me to catch up. I breathed easier, happy to be in more familiar territory. I listened to the familiar lub-dub and then handed over the stethoscope to give him a turn.

“I think your heart is very healthy, but it's also very sad.” He nodded, but I sensed some disappointment with the performance of my clinical examination. I had used my stethoscope and made a big show of auscultating every crevice of his chest. What else was he expecting?

“Aren’t you going to use that?” he asked, as he pointed to the blood pressure cuff on the wall. He wanted all the tools and talismans of my trade, and I offered them gladly, desperate to provide some solace at a time of unimaginable grief.

Apparently, he had said what he needed to say that day. When he climbed down from the table, he stood very near me, so thin and pale. I offered a hug and his body melted into mine for a moment. Then, he was quite suddenly down the hall and off to search for the stickers that had marked the completion of every doctor’s visit of his young life.