Do you trust your colleagues? 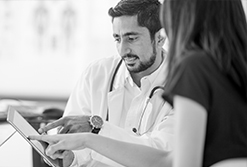 Trusted relationships between patients and their physicians are a timeless foundation of medical practice, but less is known about trust between physicians. How do relationships with colleagues impact patient care and physician burnout? This JAMA Viewpoint by Richard M. Frankel, Virginia P. Tilden, and  Anthony Suchman, explores the topic and share stories on the state of physician-physician relationships.

In preparing to convene a discussion group on physician-to-physician trust at the 2018 American Board of Internal Medicine Foundation Forum on rebuilding trust in health care, authors Frankel, Tilden, and Suchman were surprised to discover that, while considerable attention has been given to health care team dynamics, there is a negligible literature specifically about trust between and among physicians.

Given the absence of empirical research, participants were invited to share their own stories about physicians’ mutual trust in the context of clinical work (without specifying that they be positive or negative) and to collect stories from other conference participants. In total, 16 stories were collected, discussed, and categorized into 3 topic areas: co-managing patient care, how specialties relate to one another, and disrespectful behavior.

Four of the stories were judged as negative, ie, involving low trust that weakened the relationship between physicians. Three described specialists who contradicted and disparaged diagnoses or recommendations of other physicians directly to patients, effectively triangulating the patients between their physicians. In one story, a specialist who advised a patient to undergo a procedure (without the knowledge of the attending of record who had advised a more conservative course) told the patient she “would regret it” if she followed her physician’s advice. The fourth story described the reluctance of a primary care physician (PCP) to ask 2 cardiology consultants who had given conflicting recommendations to talk with each other because he was concerned about being perceived as either incompetent or a nuisance by the consultants. One positive story described a gastroenterologist and surgeon who conferred regularly about their cases and over time developed deepening trust in each other’s judgment and an ability to ask each other for opinions and advice. In a neutral story, a PCP described having sought consultants who would respect his continuing involvement in the patient’s care and would not take over the case.

How Specialties Regard Each Other

Three stories involved attending physicians who had commented to residents that physicians in another specialty (2 stories) or based in the community (1 story) were not “real doctors.” One positive story described a PCP and an emergency medicine specialist who had sought to better understand each other’s perspectives and needs to lessen tensions and grievances between their disciplines.

Four stories were negative: a resident physician was ridiculed by an attending physician for expressing concern about another colleague’s unprofessional behavior; notwithstanding a hospital policy of zero tolerance for disruptive behavior, a surgeon who had intended to hold a colleague accountable for bullying was instructed by the hospital chief of staff to “lay off”; a dean of students admonished medical students to “think carefully about the consequences” before reporting instances of discrimination; and an attending physician did not support a resident who had experienced disrespectful behavior from a patient. In one positive story, a resident felt “backed-up” by an attending physician when she perceived that her orders were challenged disrespectfully by another team member.

Each storyteller was able to describe the effect or “residue” that the other physician’s behavior had on the physician-physician relationship. Not surprisingly, high-trust stories translated into strong interpersonal and organizational ties; low-trust stories were replete with expressions of distress and betrayal. This observation is especially important in light of the influence of the medical work environment on physician self-reported symptoms of depression and burnout. In addition, disparaging comments made by practitioners about each other contribute to the initiation of malpractice suits.2  While not explicit in every case, it is reasonable to infer that patients’ experience of care could be compromised by receiving conflicting advice and by overt conflict between consultants and that the quality of decision making, and ultimately clinical outcomes, could be impaired by the absence of direct dialogue between practitioners to constructively integrate multiple diverse perspectives.

The stories collected were based on a convenience limited sample; more systematic studies will be necessary for the results to be generalizable. Nonetheless, this sample of stories is instructive and can point to some initial principles for physician-physician relationships and trust:

More research is needed in areas such as the influence of trainees’ early formative experiences on their relationships with classmates and other health professionals and the factors that can improve connection and collegiality for all clinicians. In addition, there is a need to improve the quality of care and the care experience for patients and to reduce concerns about symptoms of depression and burnout among physicians. Individual clinicians and health care leaders can begin by considering how to apply these principles in their own local contexts.

Link to full article in JAMA