December CME - Physician Burnout: A Serious Symptom, But of What? 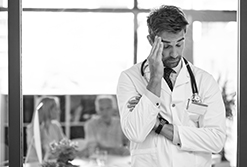 A patient complains of intermittent wheezing. He cannot characterize the wheezing further with regard to timing, precipitating events, or how it affects his health. A physician makes a diagnosis of asthma without further evaluation, gives the patient several recommendations regarding lifestyle modification and potential precipitants, and prescribes an inhaled long-acting β-agonist and corticosteroid.

Few physicians would endorse this approach to the patient’s care. Yet that is how the profession is approaching the issue of physician burnout. The term burnout has taken on meaning far beyond what is understood about it as an actual diagnosis or even a syndrome. The medical profession has taken a self-reported complaint of unhappiness and dissatisfaction and turned it into a call for action on what is claimed to be a national epidemic that purportedly affects half to two-thirds of practicing physicians.1

The epidemiological imperative and the seemingly self-evident need to act are not based on any understanding of the true prevalence of a criterion-referenced diagnosis using measures validated in the physician population.2 Little is known about whether or how the prevalence has changed over time and, if so, why. There is no grounded understanding of the pathophysiology of burnout or agreement on how it should be measured. It is not clear whether it is a dichotomous or continuous variable and how that distinction might affect the management of symptoms of burnout,2 nor any data to guide symptom management for what are likely several variations and forms.

Two studies in JAMA illustrate several of these dilemmas. In the first study, a meta-analysis by Rotenstein and colleagues3 identified 182 studies of burnout prevalence and demographic correlates in 109 628 physicians from 45 countries. The investigators found so much heterogeneity in the study design, in the methods of measuring burnout across a wide range of cultures and health systems, in the response rates, in target populations, and in the outcomes that reaching any conclusions about the prevalence of burnout or its effect was impossible.

In addition, there was substantial heterogeneity within each instrument, which raises concerns about the validity of the instruments used. The authors abandoned a formal meta-analysis as a viable approach to present the data. Of the 182 studies, 156 used one of several variations and scale cutoffs from the Maslach Burnout Inventory (MBI) and the remainder used several variations of other instruments. In total, 142 different definitions of burnout were used.

The reported range of burnout prevalence was 0% to 80.5% (ie, no one to nearly everyone included in the studies experienced burnout). Similar results were found for the 3 domains of the MBI with a range of 0% to 86.2% for emotional exhaustion, 0% to 89.9% for depersonalization, and 0% to 87.1% for feelings of low personal accomplishment. The high level of heterogeneity again precluded further analyses of the demographic correlates of prevalence.

In the second study, Dyrbye and colleagues4 had access to a sample of 49 medical schools and 8594 first-year medical students, from which 5823 were invited to participate. Of these, 4732 students completed an assessment as first-year medical students, and 3994 completed a follow-up questionnaire as fourth-year students (22% of all US allopathic medical school graduates during that year). Of the original sample of 4732 students assessed during their first year of medical school, 4696 were available as second-year residents, of whom 3588 completed an assessment. Some specialties were represented by as few as 26 resident physicians (neurological surgery); and there were only 27 resident physicians in plastic surgery, 30 in physical medicine and rehabilitation, and 49 in pathology.

Burnout was assessed with 2 questions from the MBI, “I feel burned out from my work,” and “I’ve become more callous toward people since I started this job.” A positive score was considered to be a response of “weekly or more often” on either scale. In addition, the authors provide data supporting the face validity of their criteria, including association of the scores with suicidal ideation and high area under the curve for the full MBI domain scores. Based on the single criteria of a positive response to either question, the prevalence of burnout was 45.2% among second-year resident physicians.

The resident physicians in the specialties of urology, neurology, emergency medicine, and general surgery were more likely to experience burnout, and those in dermatology and pathology less likely. Female resident physicians and those with higher levels of self-reported anxiety during medical school reported a higher prevalence of burnout. Higher levels of empathy were inversely correlated with prevalence of burnout. Burnout was associated with higher levels of regret at having chosen medicine in general or a specific specialty as a career.

If a construct like burnout is so variable in its prevalence, then either its measures are highly unreliable, or seemingly similar populations differ widely in risk. Both explanations are worthy of study. Simply accepting the oft-quoted statement that “half of all physicians are burned out” is inappropriate. If the risk of burnout varies widely according to location, clinical setting, type of practice, medical specialty, and other demographic features, an explanatory model is essential to the understanding of the specific components of these demographic correlates that could lead to interventions.

Symptoms of burnout have been shown to be associated with several types of professional dysfunction as well as an increased risk of psychiatric illness, but the temporal relationship of burnout to these problems is unknown, as is the temporal relationship of the antecedents in the study by Dyrbye and colleagues.4 Is there a causal relationship among any of these variables or are they are colinear with other more fundamental aspects of professional stress? Longitudinal studies are needed to sort out that relationship as well as the importance of several other plausible antecedent factors besides anxiety and empathy among medical students.

The psychometric properties of several of the many adapted versions of the MBI may appear robust compared with the full instrument; however, they may be lacking in clinical meaning. Many studies focused on only 1 of the 3 domains of the MBI—emotional exhaustion, depersonalization, or feeling low personal accomplishment—despite guidance in the original formulation of the MBI that measuring at least the first 2 domains was essential to an accurate assessment.2

More needs to be known about the importance to the well-being of a physician who endorses either of the 2 following statements at least weekly: “I feel burned out from my work” or “I’ve become more callous toward people since I started this job.” Indeed, being a physician is demanding and stressful, so it may be surprising to some that the prevalence of burnout is not higher based on that criterion.

There is clearly something important and worrisome happening to physician well-being. Speculation about its causes is a worthy place to start in developing hypotheses that could lead to solutions.6 However, the self-reported symptom of burnout, which is often based on 1 or 2 questions, has rapidly become an accepted marker for an epidemic of physician dissatisfaction and potential self-harm described as a national crisis.7 The physician has become the patient, but the profession has started to act on the patient’s symptom before there is any actual understanding of its pathophysiology, origins, consequences, and effective approaches to prevention and treatment.

Physicians reporting burnout are receiving recommendations for treatments before there is any real understanding of the diagnosis. The profession has violated the very way it has taught, and been taught, to approach the care of patients. The profession can and should do better.

To learn more and earn CME go to JN Learning on the AMA Ed Hubtm.

For the full article and references see JAMA Original Investigation: Prevalence of Burnout Among Physicians: A Systematic Review