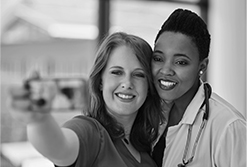 When Alexander J. Towbin, MD, associate chief of clinical operations and radiology informatics in the radiology department at Cincinnati Children's Hospital Medical Center, got the idea to use social media as a promotional tool, he initially planned to publicize his department's informatics projects. But Towbin quickly realized social media could serve an even broader purpose — promoting the entire department and increasing its visibility and influence along the way. Under Towbin's leadership, Cincinnati Children's radiology department made its first foray into social media when it launched its Twitter account in 2013. Since then, the department has expanded its social media portfolio to include Facebook, the image-sharing networks Instagram and Figure 1 (a site exclusively for medical images), and a blog. The department leverages these communication channels to showcase its programs and distribute other imaging-related content directly to a diverse audience that includes patients, families, radiologists, and other medical professionals.

“Our department is doing a lot of fun and innovative work, like our immediate results reporting project for outpatient radiography and #MummyScan, a project that involved imaging the mummy of a Peruvian child that was on loan at the Cincinnati Museum Center,” says Towbin, who is also the Neil D. Johnson Chair of Radiology Informatics. “I thought the radiology community, our patients and families, and the general public would be interested in knowing about these projects, and social media provided the ideal platform for sharing this information.”

Towbin was right. In the three years since making its social media debut, Cincinnati Children's radiology department has attracted tens-of-thousands of followers, including more than 3,000 on Twitter, about 15,000 on Instagram, and roughly 7,000 on Figure 1. The department has also drawn more than 900 likes on its Facebook page and tens-of-thousands of views on its blog. “With social media, we have the potential to reach millions of people across different medical specialties, not just radiology,” Towbin says. “This amplifies our ability to improve outcomes for children.”

Learn more and earn CME through this American College of Radiology learning module on the AMA Ed Hub TM here.