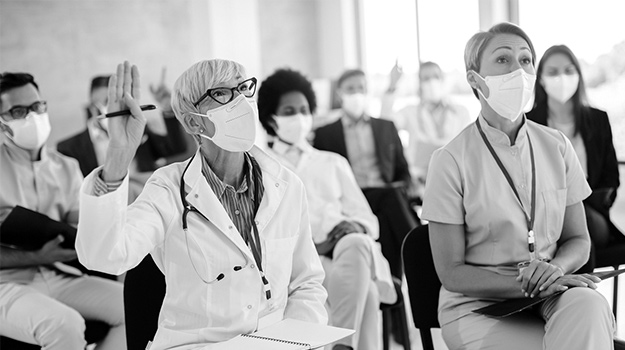 What Was the Problem?

As a family physician, Tom Jenike, MD, has experienced a tremendous amount of success professionally. It's translated into great outcomes in his professional life, but he felt overwhelmed, pressured and stretched thin. Determined to remain engaged, Dr Jenike began working with an executive coach who helped him recommit to his life's work. This led to a leadership program aimed at addressing physician burnout head on.

More than 1000 physicians and leaders have participated in the 3-day, off-site retreat with one follow-up event a month later.

“I walked away feeling more personally fulfilled with my life and with my work,” said Dr Jenike. “It came from a premise that if I was having great professional success and it all looked good, but it didn't feel good that certainly other of my colleagues had to be feeling the same way.”

Many physicians may not know anyone in the program. But 3 days later, they have established a tight knit group of people they will have lasting friendships with, said Dr Jenike.

“Through this shared experience, we've really formed a community of people that are out there caring for themselves and for each other,” he said.

Physicians have even called or emailed Dr Jenike to express concern for a colleague who seems to be struggling. They learn how to recognize and respond to physician burnout in their colleagues. That is the result of the relationships they have built in this program—the physicians look out for each other.

Once people are reengaged, they often have a desire to create a better environment for themselves and their colleagues.

“We really started to create operational efficiencies and working on external forces that are driving burnout,” said Dr Jenike. “It's not just telling them to smile through it. We understand that the organization has a part to play in making it hard, so how can we influence that?”

“It becomes the centerpiece of a holistic, systematic, organizational approach to increase well-being and health,” he added.

Graduates of the program also engaged in initiatives to address system issues. For example, an EHR optimization team worked to streamline the process of documentation in the electronic health record and reduce associated frustrations. This also includes Novant's new “getting rid of stupid stuff” initiative to help reduce administrative burdens for doctors and other health professionals.

Another system-level change spearheaded by graduates was to change the onboarding process for physicians. The new procedure includes a 3-day orientation over the course of 9 months. In groups of 30 to 50 people, physicians talk about well-being from the beginning.

“We talk about the culture we're trying to create, what is expected of them and what they can expect from us,” said Dr Jenike, adding that there is also a mentoring program to help new physicians transition from residency into practice.

“These physicians are really trying to influence the system to make it easier while they do their own work,” he said.

The program has exceeded expectations, leading to an engagement increase from the 57th percentile nationally to the 97th percentile, which meant physicians were more involved with patient care, have taken on leadership roles, and participated in organizational initiatives. Novant Health also saw a 300% growth in new physicians and employees over the years following the launch of the program.